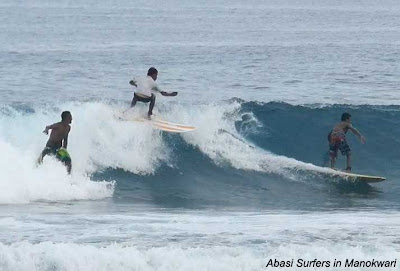 The waves along the north coast of Manokwari are big now. So, it is a perfect time to go surfing. Surfers from several foreign countries have visited Manokwari since December when strong winds from the North East begin to hit Manokwari coasts especially in the mornings and in the afternoons. This month, we can see some local and foreign surfers at Abasi and Bakaro beach. For foreign surfers, it is an opportunity to explore new surfing sites in the Pacific. Some of them are several experienced surfers from an international team that has traveled around the world. On the other hand, local youths who go to the sea with the international surfers see it as a chance to learn new techniques from their more experienced counterparts. 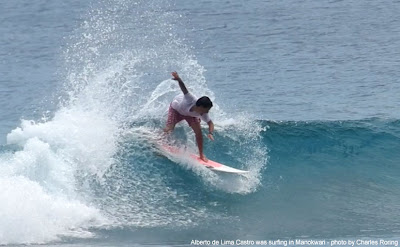 Papuan surfers in Manokwari have formed a small club called Abasi Klub Surfing. This local initiative is a trying to promote Manokwari as an alternative destination for foreign surfers who want to explore new surfing sites in Indonesia. As the largest tropical island in the world, Papua has got hundreds of kilometers of coastline that has got surfing and marine sports potentials. Members of Abasi Klub Surfing regularly practice surfing at Abasi beach and the Pantura (meaning North Coast). Most of their activities in the form of photographs and videos have been uploaded to the club's blog at abasiklubsurfing.blogspot.com. This blog attracts the attention of foreign travelers and surfing enthusiasts to visit Manokwari as their next destination. In addition to surfing, other outdoor activities that visitors like to do in Manokwari are trekking, birdwatching, snorkeling and mountain biking.
If you are interested in traveling to and need more info about Manokwari, please contact me by e-mail to peace4wp@gmail.com. I will be happy to arrange your trips and provide guiding service during your stay in this regency.
at February 26, 2013 1 comment:

Lesser birds of paradise (paradisaea minor) is perhaps the most popular birds in the avian world. The male bird has got beautiful brown, yellow, white and green feather that he displays during a courtship dance. The usual times for the show is in the mornings and in the evenings. Birders who want to watch the lesser birds of paradise can fly to Manokwari city - the capital of West Papua province in the Republic of Indonesia. An approximately 1 hour car ride will bring visitors to a village called Warmarway. After that, the journey will be continued on foot to ascend a steep forest to a level of around 400 meters above sea level.
In addition to watching the birds of paradise, visitors can see various species of tropical plants in Arfak mountains. At night, nocturnal animals such as cuscus will come out for mating.
Another place in Manokwari that is also a nice birding site is Asai. Birdwatchers can along along a river that divides the jungle. Tropical birds such as sulphur crested cockatoo, hornbills and various species of doves often fly over the river.
Please, contact me by e-mail: peace4wp@gmail.com if you are interested in watching these birds in their natural habitat. by Charles Roring

From December to early March, Manokwari is experiencing strong wind in its north coast. Big waves land on the beach making it as a favorite destination for wave surfers. There are a lot of places in Manokwari where surfers can enjoy their sports. Yesterday, I made some movies about how Papuan boys play with the waves. I upload some of them in Youtube. Here is the video that shows three boys surf simultaneously. Actually, this is dangerous because they many collide while riding the surfboards. 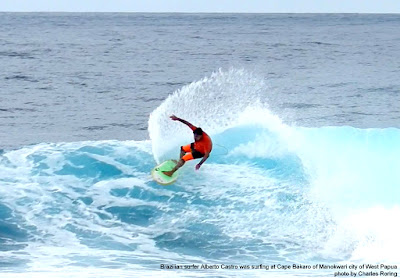 Another surfing spot where big waves can be experienced all year round is near Abasi beach. Surfers can fly to Manokwari and enjoy surfing in any month they choose. So, if you want to surf in Manokwari, please, contact me by e-mail to peace4wp@gmail.com
at February 22, 2013 No comments: