Birdwatching in the tropical rainforest of Manokwari

I have just guided 2 Dutch tourists on a 3-day hiking and birding tour in the lowland rainforest of Manokwari. It is located between the northern coast of Manokwari (usually called Pantura) and the Prafi valley.
These Dutch travelers were the first European tourists who visited the forests. While walking through the tropical jungle, they saw various species of birds that are endemic to New Guinea island. Some of them are kingfisher, lorikeet, blyths hornbill (rhyticeros plicatus), goliath/ palm cockatoo (probosciger aterrimus), white hawk, shrimp catcher, western crown pigeon, parrots, and fruit dove. I was happy to see that Mr. Herman Van Der Hart was able to shoot the Western Crown Pigeon (Goura Cristata) which was standing on the branch of a tall tree. 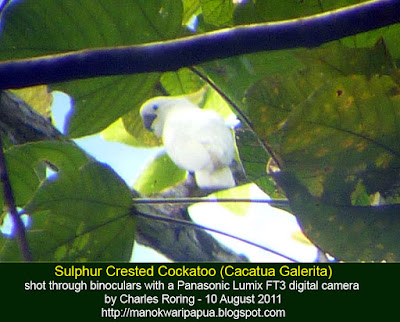 On the last day of the hiking dan birdwatching tour, we saw female birds of paradise (paradisaea minor), and sulphur crested cockatoo (cacatua galerita). When I saw the cockatoo, I immediately borrowed the binoculars that belong to Mrs. Elizabeth Pot and used it to shoot the bird. Although the result is not as sharp as a photograph taken with an SLR camera, it is quite good for identification purposes. When he saw the above picture of the cockatoo, he said that the technique that I used in shooting the bird was called digiscoping. That was the first time I was introduced to the terminology of digiscoping. 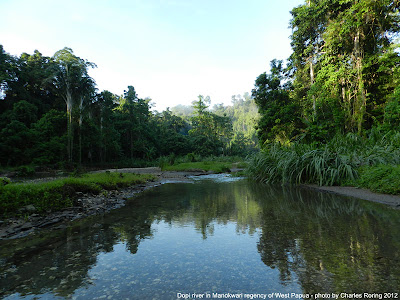 The tropical rainforest of Manokwari is a world class birding destination for those who want to watch tropical birds in their natural habitat. I have been guiding visitors from many countries on various birdwatching tours both in the rainforest near Manokwari, the Arfak mountains, and the Numfor island.
Birds play very important roles on the survivability of forest. As seed dispersers, they spread seeds of fruits which they eat to all directions where they fly. These seeds will later grow to replace the old trees that naturally fall or cut by people. 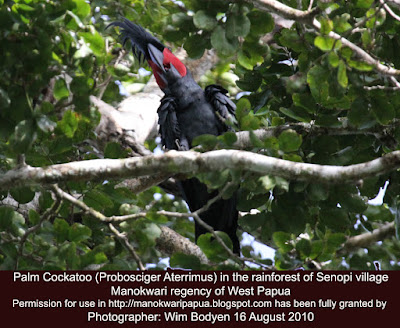 In addition to watching tropical birds, tourists who come to Manokwari can also enjoy snorkeling over beautiful coral reef in Dorey bay or Manim islet of Numfor. If you are interested in coming to Manokwari, for birdwatching in the rainforest, please, contact me at charlesroring@gmail.com
Also read:
Hiking and Birdwatching in Arfak mountains
Bird watching in tropical rainforest of Numfor island
Magnificent birds of paradise
at August 11, 2011