Tropical rainforests around the world are now being threatened by massive deforestation at a rate of 50 football fields per minute (Julie Kerr Casper in "Global Warming - Changing Ecosystem" 2010). To stop this, all the world communities must work together. There are a number of ways that we can do to reduce the deforestation and illegal logging. We can change our lifestyle by living more friendly to the environment, by designing more efficient burning stoves that consume less fuel wood or by planting more trees. 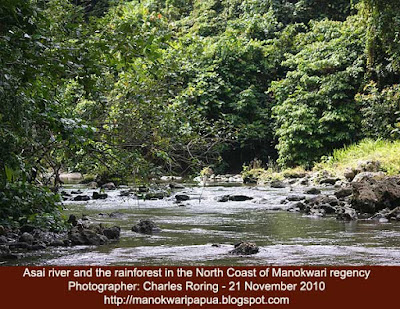 I and several nature lovers from a Dutch foundation try to introduce ecotourism as an alternative income generation for the local West Papuan people living in the north coast of Manokwari. We expect that with additional income from the forest tourism, the indigenous people in this largest tropical island in the world will not be tempted to give up their rainforest for timber exploitation and large scale monoculture plantation.
Yesterday morning, I went hiking with Monique and Jetty (two volunteers of SDSP foundation from the Netherlands) along the Asai river. Both sides of the river are covered with tropical rainforest. Our intention to go hiking along the river was to survey and determine whether the area is feasible to be developed as another tourist destination in Manokwari, the capital of West Papua province of the Republic of Indonesia. As a matter of fact that was my third visit. For these Dutch girls, it was their first one. We went there by a rent car. It took around one hour from Manokwari city to Asai. Arriving at the bridge, I got off the car to meet Oom Minggus. (He is usually called Oom Ambon by the local villagers). I informed him that I and two Dutch volunteers wanted to explore the rainforest and the river. Oom Ambon offered to accompany us. I was not aware that two of his dogs were following us. 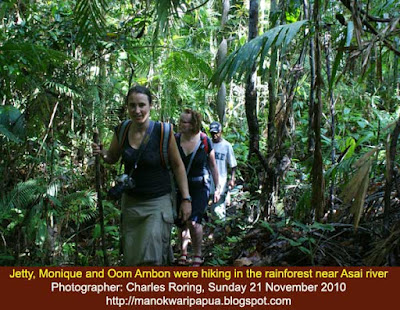 Because the sea was in high tide, the sea water entered the river making the water level near the estuary area reached 1.5 to 2 meters. So, it was not possible for us to start hiking from the bank of the river. We had to use the pathway not far from the river whose slope was quite steep. It was not easy for Jetty because she had problems with her right knee. I felt guilty because of that. After climbing up and walking down some slopes, finally we could reach the bank of the river. The water was clear and shallow a little bit far from the estuary region. Its an ideal place to swim there because the outdoor environment was still in pristine condition. I saw several hornbills flying above our heads. We could see them by our naked eyes. Seeing the water, the dogs began barking. They did not like crossing the stream. Their barking made the birds flew away. I was a little disappointed but now the chance for shooting the birds was very little. The word shooting should not be considered as killing the birds but capturing their images using digital cameras. Om Ambon tried to chase the dogs away but they did not want to return to their master's home. 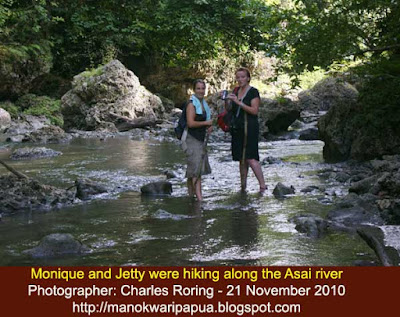 Although we were disappointed by the barkings of the dogs, we were quite happy to see the beautiful nature of the river and of the forest that looked dark green around us. The air was really fresh. Several times, we had to cross the river, climb big rocks or walk on fallen trees. This is a nice trekking route for tourists who like to explore both the jungle and the water environment of West Papua. We also had to be extra careful while crossing the river because the stones at the river bed were slippery. If you are interested in hiking along this river, please, contact me: Charles Roring - via email: peace4wp@gmail.com. Don't forget to wear water shoes or hiking boots. If possible, cover your digital still photo camera with a good waterproof case. 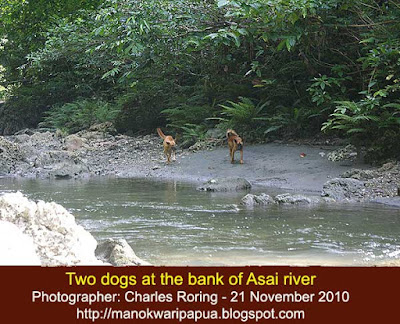