Bowers of the Bower Bird in the Arfak Mountains

by Charles Roring
I woke up immediately from a cold night and hard sleep and walked to the front room to prepare our breakfast when Rhett's alarm clock rang at 5 a.m. It was 31 July.  While pouring hot water into my glass to make my morning coffee, Zakaria (our local field guide) and Rhett Bulter - founder of mongabay.com came. I asked Zaka to call Elyakim (our birdman) to have breakfast together. I reminded him to bring my flash light so that we could use it again to climb one of the summits of the Arfak mountains while it was still dark.
We would hike this morning to see Western parotia and vogelkop bowerbirds perform their courtship dances seducing their female birds. I and our two Papuans field guides drank coffee while Rhett had lemon tea. We ate bread and biscuits. A few minutes before 5.30, we began walking from our base camp. Maria, another tour guide, who was boiling some water greeted us and told us to be careful along our trip to the mountain. 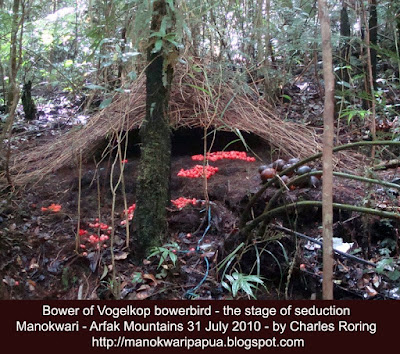 Our base camp was separated with the mountain that we would be climbing on by a river whose cool water chills the atmosphere of the Syioubri village. The water  stream continuously change the mountainous rocks into rounded and smooth granite stones where we walked on them. After crossing the river, the terrain slowly changed from flat ground to steep slope around 70 degrees quite difficult for a beginning hiker like me :-(.
While most of the villagers in the Syioubri village were still sleeping, birds in the tropical rainforest of Arfak Mountains had woken up welcoming the sunrise. Up we went slowly navigated by my flashlight and guided by our two Papuan birdman and porter.
When we had been walking for 30 minutes, my body temperature rose. I was fully sweating now and I did not feel effected by the cold atmosphere around me. I pulled down the zipper of my jacket, opened and folded it and then put it into my travel bag. The sun had just risen in the East started to brighten the canopy of the rainforest of the Arfak mountains. I did not need my flashlight anymore. I turned it off and put it back into my travel bag again. 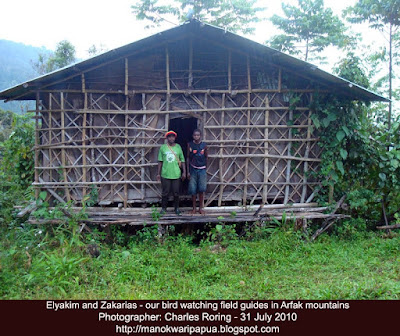 We continued climbing the mountain until we reached a clear ground where some male Western Parotia usually performed their courtship dance to attract their females. We stopped here. Our field guides asked Rhett to enter a small bird watching hut. When he had been inside with his cameras, we covered it again with fresh Pandanus leaves and left Rhett Butler alone in the hut. I and the two field guides climbed the mountain again for around 5 minutes. We would be waiting for him for 1 hour to record the courtship dance that would be performed by the male western parotia. We had been sitting on the ground that was covered with moss when suddenly the rain started to fall. First, it was only a light rain. But later after around ten minutes, it became harder making it impossible for Male Western Parotia to perform his courtship dance. The ground where the bird would perform his dance was now muddy. I and Elyakim walked down to call Rhett to continue hiking to reach the hut that had been built for watching bower bird. It was another 30 minutes hiking. The hut was big enough to accommodate two people. When we arrived at the hut, we could hear the sound of male bower bird on the branches of the trees above us. Rhett hurriedly entered the bird watching hut. Elyakim, our birdman took some bright objects from his bag and put them on the ground not far from the bower. He expected that the bowerbird would come down to take the objects and decorate his bower. Again I and the two field guides climbed the Arfak mountain to a base camp located some 1700 meters above sea level. Here, we would wait for Rhett to film the vogelkop bowerbird performing the courtship dance until 9 a.m. It's very cold here, I wore my jacket again. 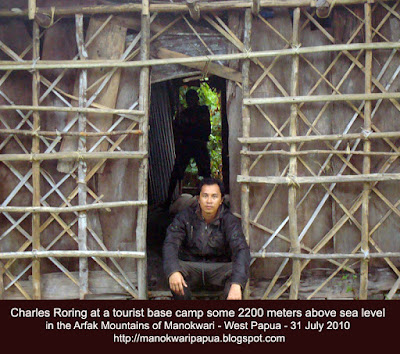 While waiting at the basecamp, I saw a male white shouldered fairy wren was being chased by female birds. It's weird to see such scene. If male bower birds try hard to decorate their bowers and perform their best courtship dance, the male white shouldered fairy wren birds do not need to seduce their females. They have abundant females that are willing to chase them the whole day. At that time I saw two female  white shouldered bird chased one male. It was 8.30 a.m. when I saw the birds of white shouldered fairy wren. The male bird had dark feather with white band decorate his shoulder. The female birds had brown feather. At first I did not know their names but Elyakim opened his Bird of New Guinea book and showed the pictures of the birds and their names.
We walked down to meet Rhett Butler at the bird watching hut when my mobile phone watch indicated that it was 9.15. Rhett said that the bower birds did not come down to their bowers. So, we climbed the Arfak mountain again to see more bowers at an elevation of around 2200 - 2400 meters above sea level. At these heights, we could see some more bowers decorated with natural bright ornaments instead of plastics and plates at bowers on the lower level 1700 meters above sea level. Unfortunately, there was no bird watching hut which had been constructed by our birdmen for tourists to see the bower bird dancing and seducing their female birds. I took some photographs of these magnificent structure which had been built by bower birds. Bowers are not nests. Bower birds are great architect that build their bowers without any mathematical calculation. Perhaps they build the structure using their animal instinct through a lot of trials and errors. Young bower birds have to learn from their adult counterparts the art of bower building and the art of courtship dance to attract their female bower birds. Somewhere on the summits of the Arfak mountains, male bower birds that are kings of the art of seduction perform their courtship dance to attract and seduce their females far from human civilization where love is now getting more materialistic than pure natural heart expression. by Charles Roring.
If you are interested in traveling to Arfak mountains for a bird watching trip and need me to arrange the trip and guide you, please contact me at peace4wp@gmail.com
Related article:
Birding in Arfak mountains
Hiking tours in Inggramui forest
at August 07, 2010 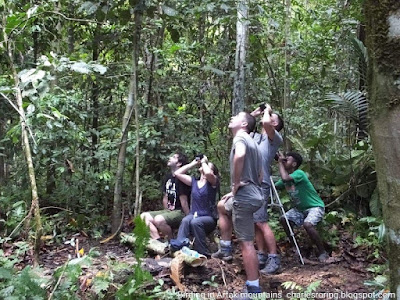