The following video is the view of Manokwari city as seen or recorded from SOGUN Hill. Manokwari is a coastal city which has now become the capital of West Papua province in the Republic of Indonesia.
Manokwari has a number of tourist attractions ranging from scuba diving around the waters of Mansinam, Lemon, Raimuti and Kaki islands to hiking in Table Mountain and trekking in Arfak Mountains for bird watching. Those who like surfing can go to Amban Pante and Yonsoribo beach where high waves from the Pacific Ocean are everyday scenes. For more information, please ,contact me Manokwari travel guide Charles Roring via email: lroring@yahoo.com
at June 29, 2010 No comments:

Traveling around Lake Kabori and Maruni Beach of Manokwari

Yesterday (25  June 2010) I went to Lake Kabori and Maruni beach with a friend of mine Paul Gasper. We visited the lake as part of my survey to assess whether the site is still potential as a tourist attraction or not. It is not far from Manokwari - the capital of West Papua province in the Republic of Indonesia. It took around 25 minutes by motorcycle from the city to Lake Kabori and Maruni beach.
I have known this lake since I was a child. I have never swum in the lake because people say that there were crocodiles in there.
We arrived at the bank of the lake near a bridge where water was flowing under it to the sea. It was in low tide. The water level near the edge of the lake was less than 50 centimeters.
Without fearing the existence of crocodiles, I jumped onto the sandy bank of the lake and walked slowly across the water to a small sand dune in the middle of the lake. It was quite safe traveling around Lake Kabori, exploring the flora and fauna that inhabit the lake and its surroundings.
While I and Paul were walking around the sand dune in the middle of the lake, we saw a boat rowed by some Papuan mothers and their children. They were catching fish. Paul called them. They heard our call and turned their boat. We had to walk deeper into the water to be able to talk with with. The hard soil gradually changed to muddy ground in the higher water level. We waited for them to row their boat closer to us. When the distance was close enough for us to communicate, I greeted the mothers and the children. We asked whether there were still crocodiles in this lake and whether we could hire their boats to bring tourists around the lake. The mothers said that the local people had killed all the crocodiles so we would not be able to see any. With more housings were being constructed along the lake, animals that lived in the lake were now intensively hunted for their meat. They also said that tourists could hire their canoes to paddle around the lake.
Besides Lake Kabori and Maruni beach, there were other interesting places around the city of Manokwari. They included Mansinam, Lemon and Raimuti islands. All of them were located in the Dorey bay. Around these islands, visitors could enjoy swimming, snorkeling or even scuba diving.
If you are an adventurous person, and want to visit West Papua with me as your tour organizer or guide, pease contact me via email to: peace4wp@gmail.com or by whatsapp to: +6281332245180
Also read:
Manokwari bay in the afternoon
Manokwari bay in the morning
at June 26, 2010

This is the second post of this month that I wrote about artist Tony Mansiraken Krey. Every day his friends like to call him Tonci Krey. In our last conversation, he said that in his old age now, he is trying to be more productive in conducting research about Papuan art and culture and writing them. In his opinion, he has to record many of the folk stories and traditional ceremonies and rituals which are gradually forgotten due to the rapid development and modernization of Papuan society. He said that he can only be productive for ten years to come and he wants to do his best preserving the Papuan culture for the next generation of Papuan indigenous people. 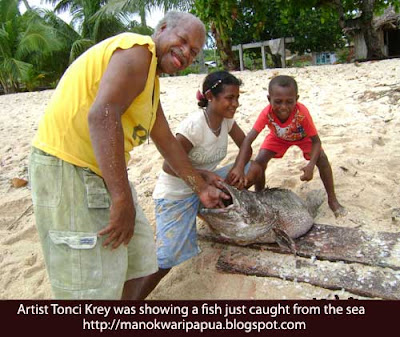 Tonci Krey is now teaching young artists in Raja Ampat islands. He has formed an art group which he calls Sanggar Karerin Art Waisai (SKARWAI). If you visit Waisasi, the capital of Raja Ampat regency, you can meet him at Taman Wisata (WTC). A.6. The easiest way to contact Mr. Krey is by calling him through his cell phone: 081344937392. While making pulpit for GKI chuch of Jemaat Immanuel in Waisai, he managed to record an interesting legend about Flying Dragon. 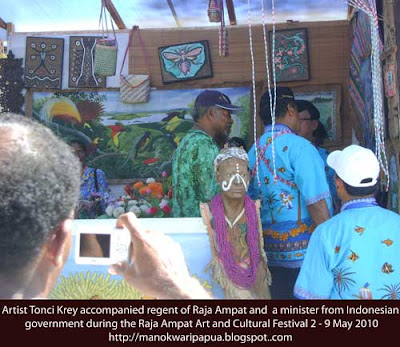 Once upon a time, in a village of Urbinsopen of there was a flying dragon that could change its form into a human being. The dragon lived in a cave at Cape Morbandi in the eastern part of Waigeo island. At night it came to Urbinasopen village to meet its lover, a beautiful girl from the village. Before sleeping with its lover, the dragon took off its skin and turn itself into a man. This happened many times and the villagers had not known about it. Because of her love to the dragon, she became impatient with him. She wanted him to be human being forever. One night, while her lover was sleeping, she took his dragon skin and burnt it. Morning came and he turned into a flying dragon again. It could sniff its burning skin and realized that it could not wear its dragon skin anymore. In the afternoon when the sun was fully shining the surrounding weather became very hot. The dragon could not stand the hot temperature and died. Seeing that her lover had died, she regretted about her deeds and also died. Now, people can see the cave of the flying dragon that is located at Cape Morbandi of Urbinasopen village in the District of East Waigeo. 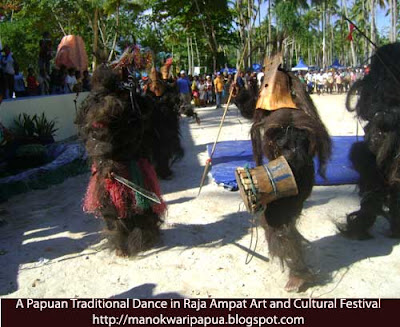 He also managed to organize the Raja Ampat Art and Cultural Festival from 2 to 9 May 2010 to celebrate the 7th anniversary of regency's administration. Thousands of people visited the festival including Regent of Raja Ampat Regency Drs. M. Wanma and a minister from the Indonesian government. 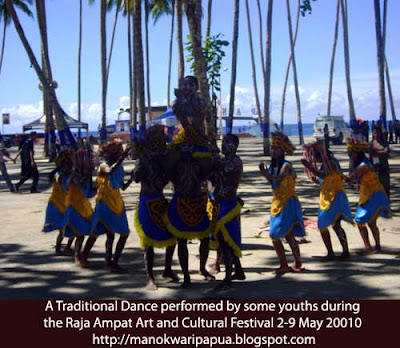 Mr. Krey has recorded a lot of folk stories. One of them is what I have just written above. Every time he visits a village and makes pulpit and interior decor of a church with other Papuan artists, he will try to collect information about folk stories and traditional ceremonies from the village and write them. This is one of the best ways that he does in his old age preserving Papuan art and cultural identity for future generations of Papuan people. by Charles Roring 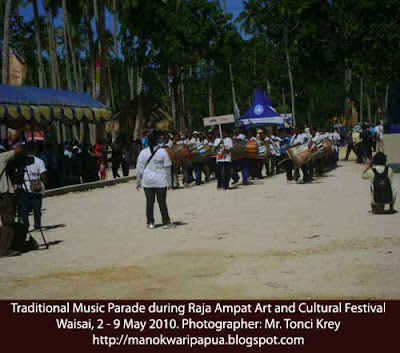 In Papua, there is Tony Mansiraken Krey - a respected and famous yet simple and humble artist who lives in Ketapang boat station of Manokwari city. His brilliance is reflected in thousands of artworks.  A few days ago, I had a chance of talking with Tony Mansiraken Krey, a senior and prolific artist from West Papua. He had just returned from Raja Ampat islands where he created pulpit and statues inside a GKI church and organized an Art and Cultural Festival which was a big event for the regency this year. Art groups from villages and districts around Raja Ampat came to participate in the event. It is expected to be an annual event which is regularly conducted from 1 to 9 May 2010. Raja Ampat islands have been famous for their scenery and underwater coral reef but the presence of Mr. Krey in the islands have brought Waisai (the capital of the regency) into another era where art and culture of the Papuan people are revitalized. 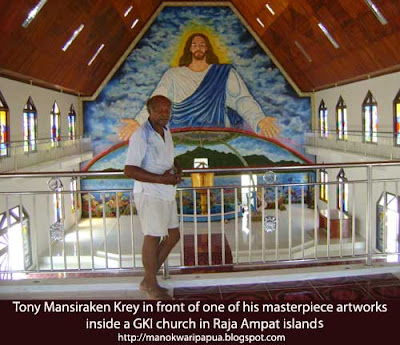 Mr. Krey visited my Xavier bookstore at 2 p.m. and we were able to discuss a lot of matters ranging from the promotion of artists in Manokwari to his works in research and development of Papuan contextual art inside church buildings. He has made various pulpits that look like sea shells or boats. He performed street art exhibition in West Biak which attracted the attention of youth and elders alike.
I am amazed to see hundreds of photographs that show his works and activities related to his struggle in developing art in Papua and in training young artists. 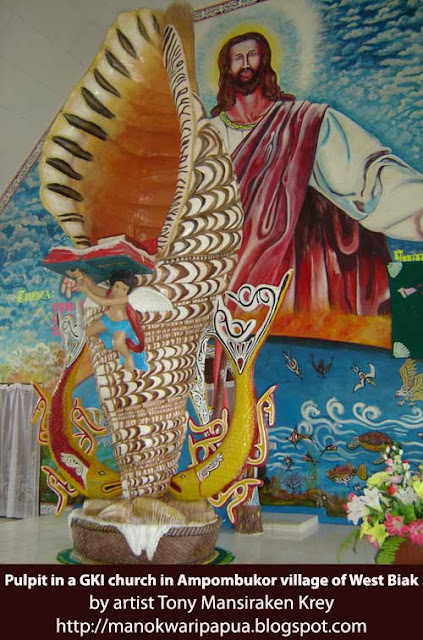 Although Mr. Krey lives in Manokwari, his artworks can be seen along the northern region of West Papua from Jayapura, to Biak and Numfor and from Manokwari to Sorong and Raja Ampat. I wish I could put all of the photographs of his artworks here but given to the volumes of the photographs, I think that they should be part of a series of blog posts about him. 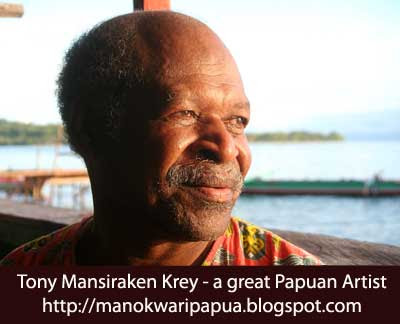 After receiving copies of photographs of his artworks, I am considering of writing a number of blog posts about artist Tony Mansiraken Krey in series to show the world the beauty of Papuan art and culture as created by this great Papuan artist. 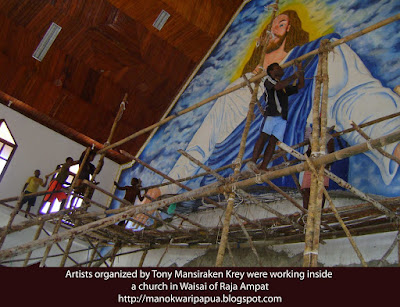 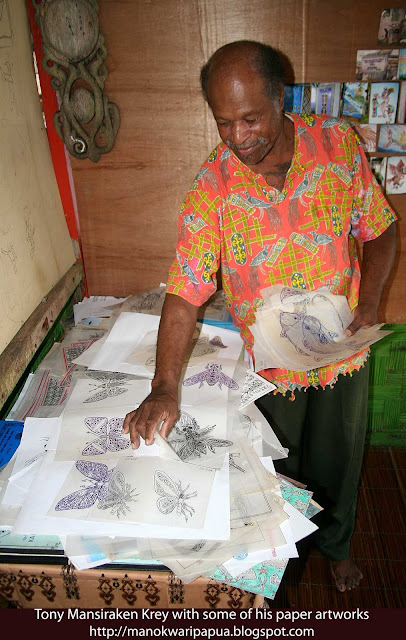 Also read:
The Sea as the Source of Art Inspiration
Artist Tonci Krey, Raja Ampat Art and Cultural Festival and the Legend of Flying Dragon
at June 13, 2010 No comments:

Tourists who come to Manokwari, after traveling around, usually ask me where they can buy souvenirs. As a tour guide, I know some artists who make high quality carvings, paintings and drawings, and woven cloth. When I accompanied Katja Zimmermann, a German tourist, around Manokwari city, she asked where she could buy souvenir. I mentioned the name of Mr. Nico Asaribab. He is a senior wood carving artist who lives in the Anggrem area. His house is only a stone throw away from the beach. We went there at 3 p.m. His son, John looked happy to receive us. At that time they were carving the wooden door of their house. Mr. Asaribab was not at home. John called him via his mobile phone and several minutes later, his father arrived at home still wearing his black jacket. 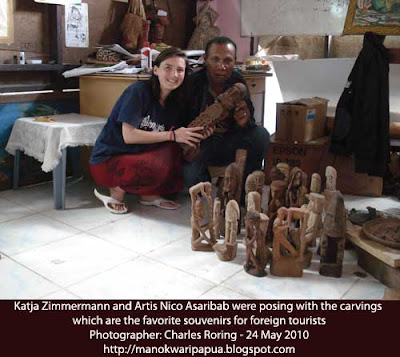 I took a photograph of John and his father, together with the other family members. The door would be decorated with beautiful ornaments carved on its surface.
Katja bought a beautiful wooden carving. As part of my campaign in promoting the art and artists of Papua, I asked Katja and Mr. Nico Asaribab to be photographed together. The interior of the house looked bright that day and I was able to get a good pose of them while Katja was holding a wooden carving. She didn't buy the one that she was holding. Instead, she bought one that could be carried in for her travel bag. Katja looked beautiful holding the Papuan artworks next to Mr. Nico Asaribab who was smiling in front of the camera. 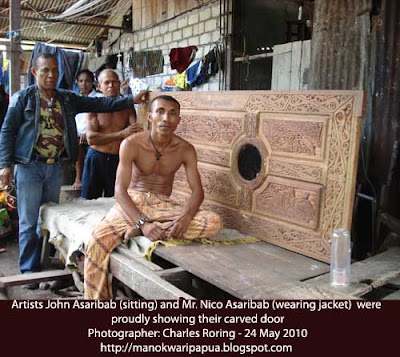 I hope that if you (readers) also come to Manokwari of West Papua, you could buy some souvenirs which the Papuan artists have created. Your money is very useful in supporting the economic livelihood of the artists and in encouraging the development of eco-tourism. Papuan will not sell their timber for cheap price to logging companies. Instead, they will be more creative in producing high quality artworks that only spend little amount of wood as the raw material for the souvenirs that they produce. Artists in Manokwari make their houses as their working studio and also as souvenir shops.
I also hope that by writing articles about eco-tourism in Manokwari, more tourists will come.
One of the ways that we can do to protect the tropical rainforest in West Papua is through the promotion of eco-tourism and through finding alternative jobs to Papuan so that they can earn a living through selling artworks, being tour guide or providing other services to tourists and not cutting trees and selling the logs in cheaper price to logging companies. by Charles Roring
Also read: Korwar Art Style from Geelvink bay by Mr. Asaribab
at June 02, 2010 No comments: