Yesterday (8 March 2010), I escorted three Dutch tourists traveling around Komplex Missi and Kota area visiting the local Papuan artists in Manokwari. First, we went to Mr. Lucky Kaikatui whose home is located at the foot of the Table Mountain, another great attraction for foreign tourists who want to see and experience the magnificent beauty of the rainforest. 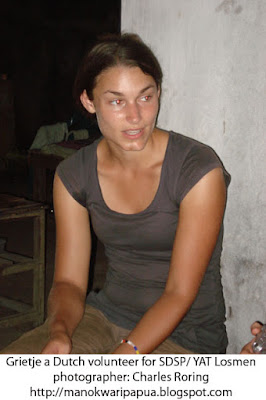 While in Lucky's house, the tourists saw some beautiful oil paintings in large sizes. One of them was the painting of birds of paradise. Lucky explained how he loves to paint using oil painting as based media to depict the beauty of Papuan natural environment, its flora and fauna. 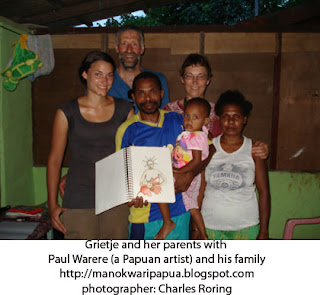 After sitting and talking with the artist for around 20 minutes, we continued our trip to Paul Warere, a close friend of mine who is a multi-talented artist. Paul can draw or paint using paper and tree bark as his media. He can also carve wood to make beautiful statues. When we were in Paul's home, he showed us some of his drawings which symbolized the communication language of the indigenous Papuan people when they had not known any written language. I told them that Paul was the one whose artworks have been photographed and printed as postcards that are now being sold by my Xavier bookstore and by YAT Losmen. We were not long in Paul's house because we had to visit other Papuan artists. We left Paul's home and continued our walk to Mrs. Fonataba's house. While we were walking through a football field, Papuan children were shouting at us, "Mister, Mister, Hello Mister." Everybody - no matter man or woman will be called "mister". Grietje and her parents just smiled and greeted these nice children. 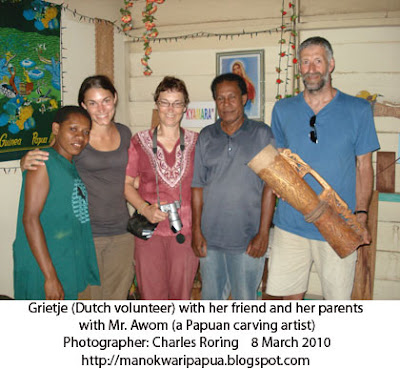 Arriving at Ms. Fonataba's house, I shouted, "Selamat Sore, Mama" meaning "Good Afternoon, Mother?" several times but no one answered my call. Ms. Fonataba's neighbor said that she had gone to Sorong to attend her son's graduation ceremony.
The sun was nearly set in the West when we visited a tomb of a Catholic priest next to a nun's house which is in local term, we usually call Biara. The priest was murdered during the World War II.
Then we continued walking to visit some Papuan artists in Kota area (downtown). We went to Mr. Awom's house, an experienced wood carving artist. There Gietje's father (Theo) bought a tifa (a traditional Papuan drum). It has not been covered with leather sheet and we asked Mr. Awom if he could cover it the next day.
Our walk that afternoon was very tiring. We arrived at Mr. Nico Asaribab's house at around 6 p.m. He was not there. His son had to call him. Ten minutes later, he arrived at his home and the Dutch tourists were able to talk with him. They bought a bag (made of tree bark) and a wooden carving.
It was a tiring journey but nice experience because we could see little Manokwari from the perspectives of Papuan artists. They (Grietje's father and mother) would leave Manokwari for the Netherlands on Thursday and I hope that they really enjoy their trip in Papua and tell nice stories about this island to their friends and colleagues. Grietje is a Dutch volunteer who works for SDSP/YAT Losmen in Manokwari of West Papua in an effort to empower the local indigenous Papuan so that they can enter the modernity with courage, and confidence without having to abandon their cultural identity. by Charles Roring
Also read:
Manokwari Travel Stories
A Visit to Raimuti Island of Manokwari Papua
at March 08, 2010