There were cruise ships sailing to Manokwari in 1980s from abroad. Now I haven't seen any. As cruise ships routes change according to the tour packages that they offer to tourists, Manokwari will not be in a fixed port of calls for them. If you prefer traveling to Manokwari by ship instead of by airplane, there are passenger ships that serve sailing route from Jakarta, Surabaya, Makassar, Sorong to Manokwari and finally Jayapura operated by PELNI, an Indonesian state owned sea liner. These passenger ships cost much cheaper for economy class compared to the rates offered by most airline companies that provide flight to Manokwari from Jakarta. For first class ticket of passenger ships, its price is not too different from the airplane ticket, in fact, it sometimes more expensive. 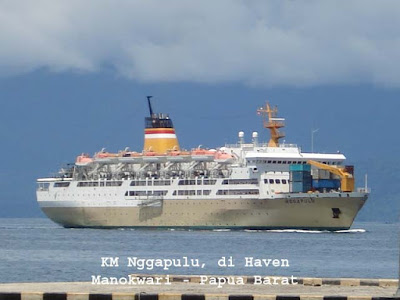 Sailing to Manokwari on passenger ships may take several days up to one week depending on which port you embark from. PELNI ships provide cheap or affordable sea transportation in regular schedule.
at February 17, 2010